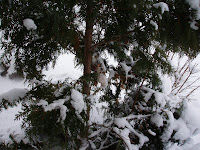 my erosion bundle has been experiencing mother nature in the forms of rain, sunshine, sleet and snow.... I wonder what cool changes are occuring inside the bundle....
Posted by Jean-activeimagination at 1:15 PM 5 comments: 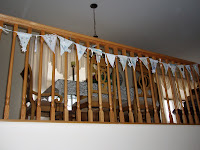 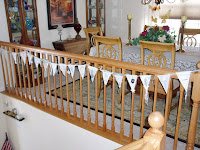 The winter banner swap is finished and the swapped banners have arrived home. They are gorgeous in real life...so dainty, sparkly and creative. Of course...what would one expect from my Diva artist friends! I have hung the banners on the front entryway banister for all my guests to see and for me to see each time I pass by...I love them! Here in Ohio, the outside is wet, cold, and covered with snow...but inside the beauty of winter shows without the wet, cold part....hehehehehe
Posted by Jean-activeimagination at 1:09 PM 1 comment: 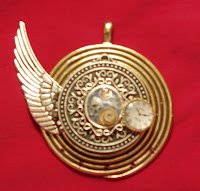 I am currently beginging a new swap with an on-line group ..the Divas... there are 8 of us participating. we each are to start a Steam Punk item and send it to the next on the list for them to add to the item. It will take 8 months for it to return back home. for this piece...i used a brass colored pendant disk, drilled holes in it along the bottom and also in the middle to attach a locket that opens and closes with a magnet. I left the inside blank so someone can punk it up. on the lid of the locket, I added the top of a nail brad and tiny watch gears, and crystal lacquer inside a silver filagree charm. I also added a round clock face and silver wing. I am calling my piece the "winged disc of time"
Posted by Jean-activeimagination at 9:55 PM 5 comments: 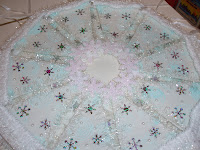 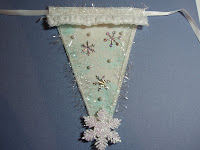 Winter has arrived in Dayton, Ohio....it is cold and we have had lots of snow today....so....I decided to work on a swap I signed up for on the Diva list.
The winter wonderland swap....make 20 5 x 7 banners in white with a hint of blue were the instructions. I used stiff white felt...stamped with tinted gesso, then added fringe and shiney yarn, snow flake and used my cuttle bug to cut out snowflakes from prism tags I had on hand, then glued some white beads. they are ready to go to the hostess...and then I will be getting back 20 different banners from 19 other artists....aren't you jealous? hehehehe
Posted by Jean-activeimagination at 9:37 PM 4 comments: 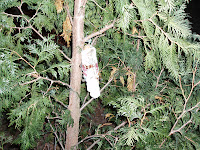 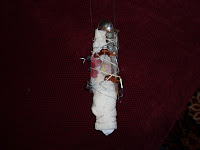 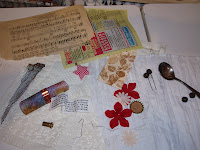 One of my Diva friends, Kris, got a bunch of us interested in participating in a special art project this year. We each were to gather a variety of items, fabrics, metals, paper...etc...and bundle them together and then hang them outside until April 15th and allow Mother Nature to "alter" them in the snow, rain, wind etc. We are to post photos every now and then and when the project is done...we are to make an art piece using items from the bundle. Living at a condo community, I have to be careful of where and what I hang as there are " nosey police" who would love to report us for breaking the rules...LOL...so I hung mine on a recently cut evergreen tree...in the back....you can see it from the front porch but if anyone asks...i will do my best to ignore them or get them interested....if that is a possibility....

I gathered lace, fabric, paper, sheet music, pages from a phone book, silk flowers, an old metal spoon, metal wire, mesh, bells, a piece of canvas with water color sprays, a bottle cap, some pieces of copper, string and an inked tag....most of the items on on the outside of the bundle in hopes they will rust and change or fade.
Posted by Jean-activeimagination at 8:45 PM 5 comments:

Tis 2010 a, new decade arrives
I hope your year is happy, healthy and full of art supplies.

seriously....2009 was a challenge to many of us....
Dallas has been without a job all year...but not due to not trying...the guy sends out resumes everyday and applies for anything in or near his field. He has had tons of interviews....but....let's face it...being 65 isn't helping his prospective employers feel easy about hiring an old fart. Or they tell him he is over qualified...shoot he doesn't care...he just wants a job.

Last week he got a verbal offer...and they called back saying they will send the written offer once the govt....gives the approval....so hopefully this week....!!!
they told him his starting date is January 19th...so keep body parts crossed if possible.

I have been very busy with the COPP program...not sure when we will graduate...still waiting for some in our class to catch up....sheeesh. But am spending a lot of extra time at the police department each week...either for training or working a shift with a senior COPP. I also got to help with the Resolution run ...a 5 k....New year's eve. We were the lead car....stayed warm...hehehehe...there were 962 participants. ...not bad for 13 degrees.

I also worked two shifts at the theater as parking lot security....boring but decent pay for what we do. I just heard that I may be made an offer for 3 nights a week..come February. cool! I also worked the day after Thanksgiving and the day after Christmas at Aeropastale....(DD is an assistant manager there and they can hire family for those two days to help out with the madness) And it was hard work....my hat goes off for those who work retail for a regular job...the lines were out the store both days...I got to work prep which was take off the sensors, offer gift cards, and fold and bag the items after the cashier does their thing. I liked that job a lot better than putting stock on the floor....does anyone really know how many different kinds of cami's and hoodies are available? Way too many different kinds and they are all over the store and for different prices....not easy to figure out and I was worried I would put the wrong one on the wrong table or hanger...LOL

And I took the census test a few weeks ago and will be working that come April....I did it before when I lived in CA and it is a short term job but kinda fun meeting most of the people.

anyway....it has been a while since i posted and thought I should try to do better this new year.
Posted by Jean-activeimagination at 8:29 PM 1 comment: 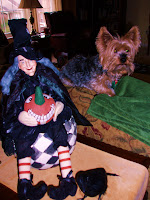 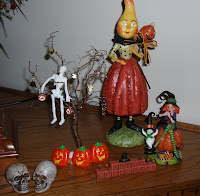 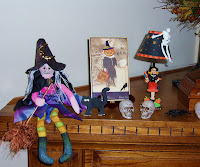 I participated in an on-line swap of banners to spell out the word Halloween. The banner arrived today and it is now hanging from my fireplace.....I LOVE IT!!! this is the first banner swap I have been part of and my next one will be a winter wonderland swap due in February.
I also did a bit of decorating today...my helper, Maggie did not like the black crow and kept growling at it...heheheheeh
Posted by Jean-activeimagination at 7:11 PM 3 comments:

I left the 21st Century....for the afternoon 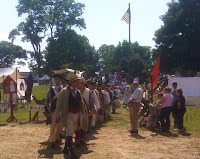 Ohio has had the best weather this last week...in the 60's and 70's ...low humidity and lots of sunshine.... so, today Dallas and I decided to attend the New Boston Fair near the city we used to live in. This fair takes place every labor day weekend and is a two day event of strict ..re enactment of the late 1700's and how life was like in the area ...settlers vs. local Indians, merchants, food, militia etc. The participants must follow a strict code...no modern items allowed even down to their eye glasses and words. We go up and down the various tent lined avenues....dodging horses and oxen carts and the resulting (plops)...and watch magic acts, sword swallowers, musicial presentations, and working craftsmen from lace makers to blacksmiths to basket weavers,soap makers, milners, furniture makers, and even the doctor. All the participants do a great job staying in character and it is fun to tour and observe. It was very crowded today...due to the weather....normally at this time of year it rains and is in the 40's.... we watched the battle, and jumped when the cannons were fired and watched the various militia men march about. I bought some pot metal buttons that were cast from original recast molds...some mititary and others just deocrative, and a "gill" full of white shell buttons, and a thing to hold my hair up....metal and beads...and Dallas got a horn to decorate and a wood whistle...tiny one. We had fun...but smell like campfire smoke....

now back to the 21st century....
Posted by Jean-activeimagination at 4:59 PM 4 comments:

The Ties that Bind project is on TV

click on the right side to bring up the ovarian cancer site.
Posted by Jean-activeimagination at 3:35 PM No comments:

OK, I am now doing something I said I would never do and that is create my own blog. What to do? I keep an art journal, and have done so for years but this will be a bit different. I must keep this "clean" and nice and not rant and rave if I am upset...or maybe I can but in a nice way...smile. Please be patient with me as I get the hang of how to organize this space to be easy to navigate and fun and useful. Please feel free to have me add your blogs to my list...and to make comments and suggestions...heck, if I don't like your suggestions, I will write about you on a future entry...LOL

Jean-activeimagination
Ohio, United States
Semi retired RN who is enjoying life exploring multimedia art. Married 30+ years to my best friend, have one daughter who lives on her own and a Yorkie dog.